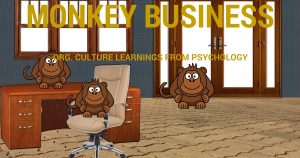 Continuing with our theme of Organisational Culture I thought it a relevant to introduce some of the psychological experiments undertaken that clarify how individual behaviour can be influenced.

The first experiment is often referred to as “The 5 Monkeys Experiment” and for simplicity you can watch the video below to understand the experiment.

The outcome is an explanation of perhaps the most damaging phase within organisations which is: “That’s how we do things around here”.  Actions of the monkeys, especially those introduced overtime, highlight our human tendency to ‘go with the herd’, relying on those around us to provide social cues for our individual behaviour.  The actual story is itself a modern day fable, loosely based on the experiments of G.R. Stephenson and additional experiments by Wolfgang Kohler – the popularity of the story, often resurrected in Ted Talks, is itself ironic.  Nevertheless, we can take lessons and I find that rather than focusing on how negative behaviour can spread, we should also look at how demonstrating desired positive behaviours can also lead to the ‘herd’ (workforce) mimicking these behaviours and adopting them as part of the desired social culture.

The second experiment is the Milgram Experiment conducted in 1961 by Yale University psychologist Stanley Milgram.  The focus of the experiments was on individual’s willingness to obey authority figures, even where obeying conflicted with their personal morals.  Subjects would play the role of “teacher” having to ask “learner” questions.  The learner was placed in a chair behind a wall, the teacher asked questions and any incorrect answers were punished by administering electric shocks.  There were 30 switches on the electric shock board, marked in 15 volt increments with increasing danger signs accompanying ranges.

The “teacher” could not see the “learner” (who was a con-subject set up to play the role) but could hear their response to each level of shock.  They had met the “learner” in the hall where roles were allocated by a lottery (although the result was set up), they had also seen the “learner” get strapped into the chair.  Of the 40 subjects, all obeyed and gave shocks up to 300 volts; 25 gave shocks up to the maximum level of 450 volts.  At the end 65% of people never stopped giving shocks, even when the “learner” said he had heart-trouble.

What does this mean for business?  Well it explains how unethical behaviour can flow through an organisation, even when you have filled that organisation with what you believe are “ethical” individuals.  Think of the Global Financial Crisis, the appetite for high growth and risky behaviour at the longer term expense of clients.  It also displays the willingness of people to follow instructions from a hierarchy – and that only 1 in every 3 people on your team will likely question your motives or actions even if they believe that what you’re doing is wrong for the business or customers.  If you have a large organisation it means that if you don’t keep in contact with what is happening within the different units or departments of your business, actions can easily veer from your desired path, and no one may raise the alarm back up the authority chain.

To finish off here’s some witty cartoons that represent the above lessons nicely. 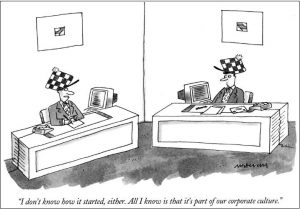