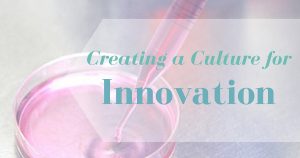 Last week we attended a lecture by Professor Baden U’Ren at Bond University as part of their Homecoming celebrations.  The topic was driving innovation through organisational culture – a great way end to our month of looking at culture within businesses.

We explored the Innovation Engine – devised by Seelig in 2012 book of the same name.  In the model Attitude, Knowledge and Imagination are contained in the middle and overlap as they represent the individual’s mind.  Whereas external factors such as Culture, Habitat and Resources influence the inner factors and in many ways guide and shape the mind of the individual. 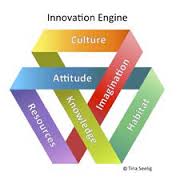 In order to display how a common purpose can amplify personal-mastery experiences through harnessing goal orientation we participated in a simple activity.  Twelve people formed two teams, each were given a similar task, to complete a child’s jigsaw puzzle.  When we started our task it didn’t take long for someone on our team to recognise that the puzzle was in fact holographic, being that each piece had two images on it, that changed depending on the angle that you looked at them.  There was quite a bit of confusion as we proceeded with the task, even after the other team had finished (in what seemed like record time), eventually we got there.  It was only afterwards that we discovered the other team not only had a regular jigsaw puzzle but were also given the box containing a picture to guide them.  That explained their quick finish time – they had a purpose, they knew what they were aiming for and this sped up their accomplishment of the task.  Our team meanwhile was consciously (on this occasion anyway) set up to fail (i.e. be the slower team).

It’s a simple exercise but I’m sure we all sometimes give tasks with minimal direction.  Have you ever wondered how this affects the process of your team completing a task?  I’m not saying that you should micromanage your team, most people desire a level of autonomy. However, having a common purpose, a goal to aim for not only unites a team but also delivers a framework on which to make decisions – giving autonomy to your team whilst at the same time giving you confidence that their decisions are progressing your goals and cause simultaneously.  In a way Goal Orientation through common purpose allows autonomy to happen, which in turn builds individual’s self-confidence though mastery and feeds into attitude and knowledge.

The process reminds me of the story of JFK visiting NASA in 1961, asking a janitor what he was doing to get the response “I’m helping put a man on the moon.”  By understanding the purpose of the organisation, it’s “why” and vision that janitor felt a part of something bigger than simply mopping a floor.  The floor became the pathway for engineers to walk unobstructed to resources to work on rocket engines; clean desks allowed people to dive into their work quickly and the overall cleanliness and hygiene of the facility meant that others, also putting man on the moon, where healthy and could achieve their goals.  The vision, why or common purpose formed the basis of NASA culture at the time.

However, we need more than knowledge and attitude in order to innovate; we need creativity and imagination.  This is where the habitat, or spaces of organisations come into play.  Innovation is often the collision of multiple ideas, requiring multiple knowledge sets and therefore we need spaces that allow individuals to discuss and exchange ideas and concepts.  New thinking arises from challenging assumptions the “this is how we’ve always done it” by seeing things from different perspectives.  A popular quote these days is that “space is the body language of an organisation”.  How you design and layout your office space will influence how people interact within it, it gives cues as to what is expected, tolerated and allowed to happen.  Throughout Baden’s presentation he drew on experiences from a recent trip to Silicon Valley, when explaining this concept he reflected on Stanford’s d.school and how the space is transformational, set up like a theatre with nothing bolted down.  Bond University has taken inspiration from d.school into their new Business Commercialisation Centre space, allowing it to transform from teaching room, to hang out space and everything in between.  Again, I am reminded how design has played a role in other organisations such as Steve Job’s redesign of Pixar’s offices to house all its team in one building rather than the previous arrangement where animators, computer scientists and executives each had their own buildings.   By allowing chance encounters and cross divisional friendships to emerge so too emerges the chance to exchange ideas.

Think of your own space.  Is there a place where teammates can collaborate?  Whether it be the lunchroom, an informal meeting room or your own office how we layout the space impacts how we interact with each other.  Think of a round table for collaborative discussions versus a square or rectangular table for hierarchical meetings; standing meetings for quick exchanges verses comfortable meetings complete with refreshments for longer conversations; even down to no table at all (think bean bags or couches with a low coffee table) to further reduce any obstacles between participants.  Next think of how people within your organisation can cross pollenate ideas.  We typically stick to our own type, sales people talk to sales people, accounts people to accounts, logistics to logistics – how can you encourage the invisible boundaries between your operational divisions to disappear – in doing so increasing the chance that ideas will be discuss and exchanged across your business.

There are lots of ways we can encourage innovation within our businesses through the culture that we set out to achieve.  Remembering that culture itself is a constantly changing phenomenon means there are always additional steps we can each do to further enhance or refine what we already have.  The first step is perhaps to just take some time and imagine what could be, then place the stepping stones to allow you to achieve it.