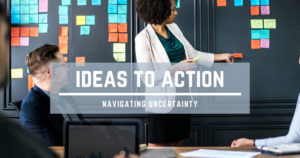 Following on from last week’s blog we’re exploring Sarasvathy’s Principles of Effectuation.  If you missed the first instalment you can find it here.

Last week we saw that entrepreneurs take a different approach to thinking and problem solving in that they often start with their means first, then build goals based on what they are prepared to lose (rather than what they expect to gain.)

This week, we look at the final three principles of Effectuation.  These steps bring the interaction with people into the process of getting a business idea off the ground.

In business, especially if you’re innovating, there’s likely to be surprises.  Rather than avoid surprises and plan for “what ifs” entrepreneurs instead invite surprises.  They then treat the surprise as clues to create new markets.  It’s the old ‘when you’ve got lemons make lemonade’ thought process.  These surprises then add to the means and vary the goals.

Rather than treat your competitors as rivals, entrepreneurs tend to make connections with likeminded people both within and external to the market they want to enter.   They allow people to self-select the connection and obtain pre-commitments early on to reduce uncertainty and create new markets together

Entrepreneurs believe that the future is made, rather than already set in stone.  They therefore focus on activities within their control in order to reach their goals.

The outputs of these three principles generate new means (resources) and goals and feed back into the first part of the process.

Effectuation principles help you start your business; however, you will shift away from effectual logic as your business progresses.  These principles will however help you to move from idea to action.