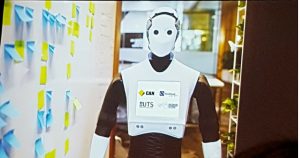 Artificial Intelligence comes about as machines learn how to do repetitive tasks better over time, this is referred to as ‘artificial narrow intelligence’ and encompasses what is becoming normal to us through the use of algorithms on Facebook, google, Spotify and amazon.  However, with the development of more sophisticated forms of AI such as IBM’s Watson and the integration of AI into ordinary objects (IoT) the impact of AI on our lives is only going to get greater.

Robotics and AI were presented by William Judge from CBA’s Innovation Centre.  We explored what these developments mean for both life as we know it, and our profession.  William showed many examples of AI in practice, from speakers, home-helper robots and retail attendant bots.  What was common though was the lack of tact that these types of AI had.

William explained AI as being a ‘contextual awareness’ in that the robot can follow a formula ‘if x….then y’.  However, he explained that as we are relational beings, with feelings, to truly embrace AI it needs to have ‘Social Intelligence’.  William explains this as ‘the ability to act in a natural way given a particular context’.  The main example was a retail assistant robot, in the video the robot was helping a lady select clothes to try on, whilst it was obvious the programmer had considered the best way to deliver a message that something wouldn’t suit a person’s body type, the robot had no concept of the social environment it was in, in that it was a busy retail shop, delivering somewhat negative views with a normal volume of voice.

CBA have developed a social intelligent robot they call ‘Chip’ they are currently testing Chip in collaboration with Stockland as a retail assistant.  If you happen to see him when you visit your Stockland Shopping Centre be sure to say hi.