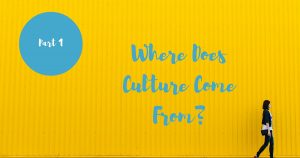 When we look at businesses, whether they are performing or underperforming, culture generally gets both the kudos and blame.  But is culture really a cause, or an outcome of success or failure?

If we consider that organisations are comprised of individuals who work together in ways that promote and achieve the desired outcome of the leaders, then it is these interactions that create culture within the organisation.  So, does describing your business’ culture, mission statements, values displayed on walls and the “our way” mantra create the desired culture or does something more need to be done?

To begin with let us explore what “organisational culture” truly is.

The Hofstede Centre describes organisational culture as “the way in which members of an organisation relate to each other, their work, and the outside world in comparison to other organisations.”  Culture can be observable patterns of behaviour, or as Aristotle put it “we are what we repeatedly do.”  So, is culture merely behavioural or do individual belief systems also have a role to play?

Does organisational culture require a deeper understanding of a business’ story?  Of “why” the business exists?  Where does this “why” come from?  A charismatic founder’s belief system?  Is there some level of “sense-making”; where individuals form a group opinion or shared awareness and understanding of perspectives and interest?  Is organisational culture a quasi-police system within the workplace; where behavioural norms are upheld by rewarding actions and thinking that keep the status-quo?  Is there only ever one culture type present in an organisation at once; or can variations or subcultures also be present?

The roots of culture appear to be a “chicken and egg” mystery.  Nevertheless, organisational culture exists.  The question is how can you influence or change it?

Behaviour is a function of both the person and the social environment.  Meaning that it is a combination of both individual thoughts, values and beliefs AND the environment that they are put in that influences the behavioural outcomes.  However, what is unknown is the contribution of each element.

Whilst we as managers or business owners can attempt to influence individual’s beliefs, personality etc. we have greater influence around creating the social environment (workplace).

See our follow up article where we explore the levers that can be pulled to create a desired social environment that will influence your business’ organisational culture.